CICA Legislative Day at the Capitol 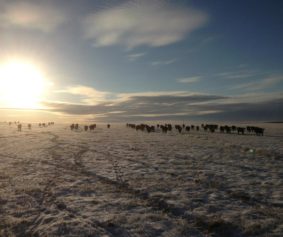 Denver, Colo. – On Monday the Colorado General Assembly’s House Committee on Agriculture, Livestock and Natural Resources heard testimony from dozens of Colorado cattle ranchers and Colorado consumers stating that multinational meatpackers and retailers were deceptively applying “Product of the USA” labels on foreign beef sold in Colorado grocery stores. Although this testimony was uncontested, and without any publicly disclosed committee debate, the committee voted 10 to 3 to prevent the only measure introduced in the Assembly to address these misleading labels from being debated on the Assembly’s floor by the states’ 65-member House of Representatives.

The bill, HB18-1043 introduced by Colorado Representative Kimmi Lewis (R), would have ended this consumer-targeted deception by reserving the “Product of the USA” label only for beef derived exclusively from animals born, raised, and harvested in the United States.

Testimony revealed that multinational meatpackers that distribute beef in Colorado were applying the USA label on beef from animals exclusively born and raised in one or more foreign countries and on foreign beef that was slaughtered in a foreign country and then subjected to only minor processing after entering the United States.

Lewis said about one-fifth of the beef available in the U.S. is imported but consumers do not know this because Colorado retailers are hiding the origins of imported beef.

Lewis told her colleagues, “All I’m asking is that you take this bill to the floor” because Colorado consumers have the right to know where their beef is produced.  “Consumers are looking at “Product of USA” and it’s a scam,” she said.

Committee members who joined with Lewis to bring HB18-1043 to the floor for debate were Representatives Perry Buck (R) and Lori Saine (R).

R-CALF USA (Ranchers-Cattlemen Action Legal Fund, United Stockgrowers of America) is the largest producer-only cattle trade association in the United States. It is a national, nonprofit organization dedicated to ensuring the continued profitability and viability of the U.S. cattle industry. For more information, visit www.r-calfusa.com or, call 406-252-2516.